Through the property are two faults. Along with these faults there are other major faults in the area.

Two Minor but Major in relation – faults that are of extreme importance are the two significant faulting systems that pass directly through the Eagle’s Vision 18 Claims. These two faults passing through the property appears to have cause the rough terrane with major to minor alteration of the outcrops and many significant ridges, cliffs, fissures, cracks, dykes, sills etc. indicative to resulting multiple stringer branch smaller faults

The “Structural Diversity” of the over-all geology, “Faulting System” of the Eagle’s Vision property itself is complex. As mentioned above, these two faults that run through the 18 claims has multiple ridges, stock-work stringers zones, significant alterations, and multiple shallow bogs below and upon top of ridges with massive irregular quartz veining/veinlets covering many outcrops and sub-crops. A prospectors and geologist haven! 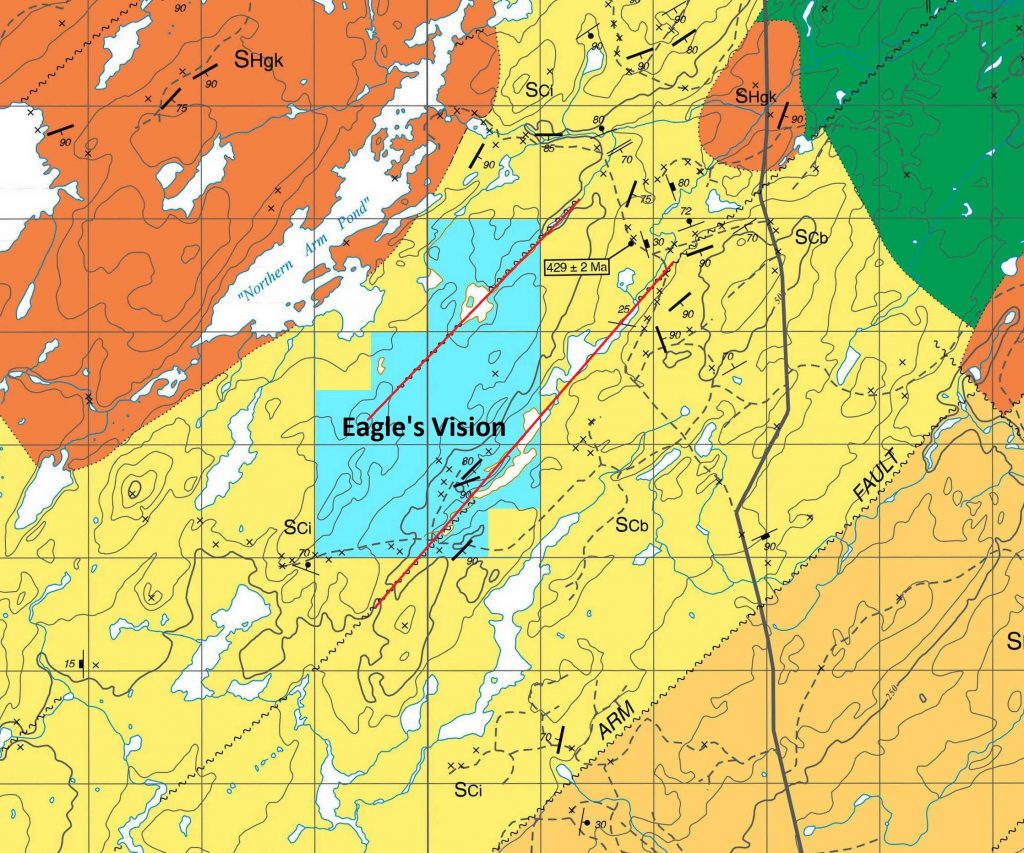 Silurian Collision of Ganderia and Laurentia along the Dog Bay Line

The map shows the importance of Major Fault Zone to the potential for Gold deposits and showing. Eagle’s Vision is located in a major fault zone. We believe this is important for our success. 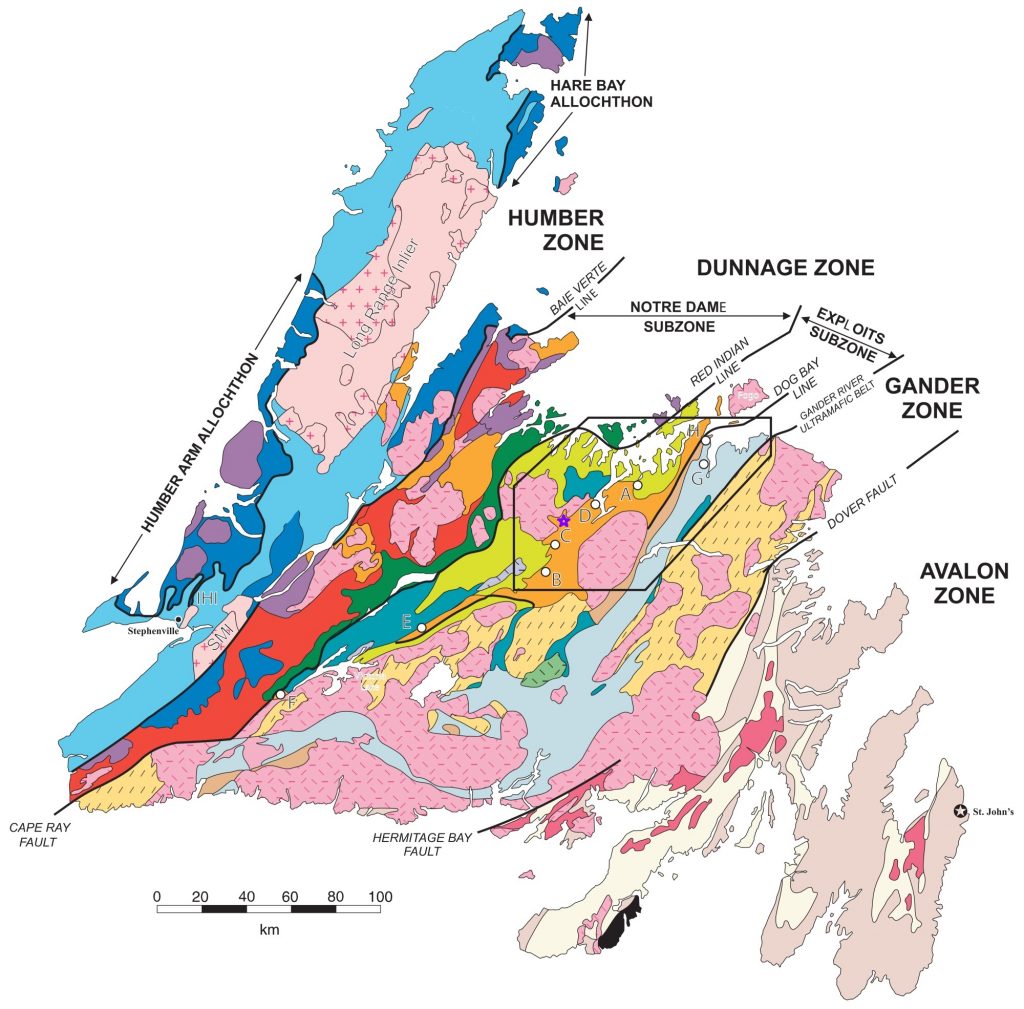 Two (2) Major / Minor Faults – The LPF: Long Pond Fault and NAF: Northern Arm Fault are in even closer proximity to the Eagle’s Vision property: part/partial in relation to 4 above faults. 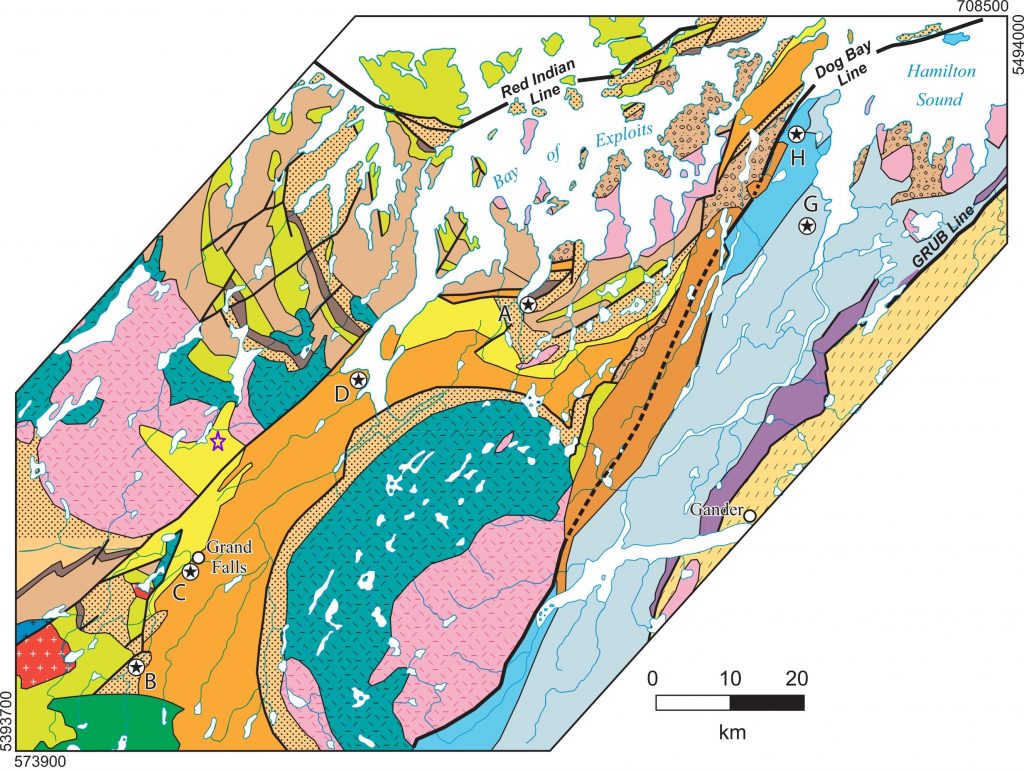 The Tectonic Folding Zones are directly over our properties 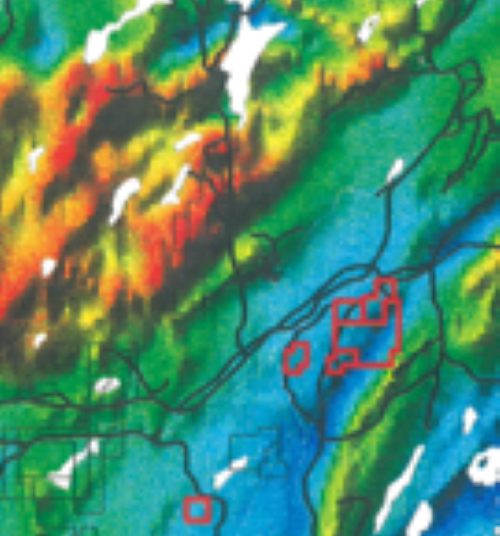 Eagles Vision, William Pynns and Terry Russell Properties are all located in the Red, Yellow to Gold, and Black zones on this map indicate core multiple “MASSIVE” Tectonic Folding of Plates that took place Multi-Millions if not Billions of years ago when the Appalachian Mountains were first formed.

Rocks in this Zone 2E/04 and proximity are aged between 1 to 2 and 1/2 Billion years old: refer to ABSTRACT, indicated in location report below:

U-Pb DETRITAL ZIRCON GEOCHRONOLOGICAL CONSTRAINTS ON
THE EARLY SILURIAN COLLISION OF GANDERIA AND LAURENTIA
ALONG THE DOG BAY LINE: THE TERMINAL IAPETAN SUTURE IN
THE NEWFOUNDLAND APPALACHIANS

The Exploits Subzone Major and Minor

The Exploits Subzone is comprised of Cambrian to Ordovician Ganderian continental and oceanic arc – back-arc complexes that formed on the opposing side of the Iapetus Ocean from Dashwoods (Williams et al., 1988; van Staal et al., 1998; Zagorevski et al., 2007). Gold mineralization in central Newfoundland and mineralised rock types is concentrated along major faults within and along the Dunnage Zone – cited in maps below. The major faults include, from west to east, the Baie Verte Line (BBL) and Cape Ray fault (CRF), RIL and Victoria Lake shear zone (VLSZ), Dog Bay Line (DBL) and Gander River Ultrabasic Belt with the largest known deposits associated with the VLSZ. Present research is focused on the emerging gold district that trends northeast to north-northeast across central Newfoundland along the CRF, VLSZ, and DBL.

The CRF, VLSZ and DBL in central Newfoundland are thrust sutures that formed as a result of accretionary tectonics involving subduction, tectonic underplating and slab break-off (Zagorevski et al., 2007; van Staal and Barr, 2012). 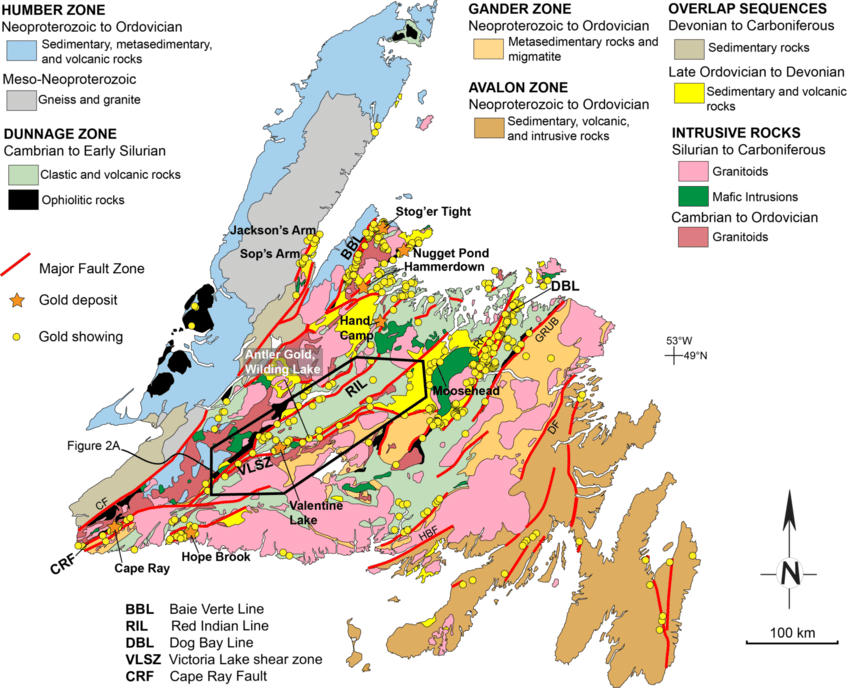 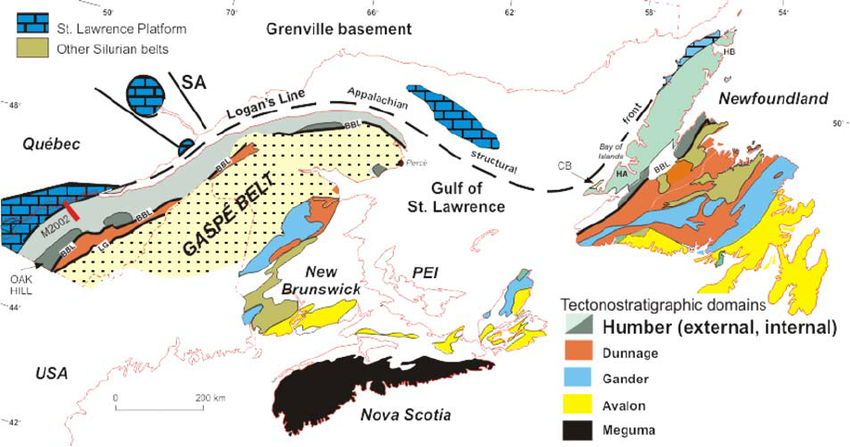